0
was successfully added to your cart.

Outrunning Fear: My Journey to the 2016 Boston Marathon 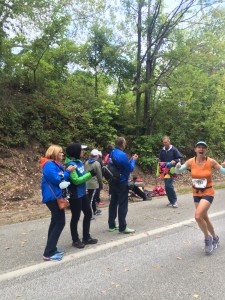 This pic was taken in the last mile of the 2015 Erie marathon when I qualified for Boston. Photo credit: Matt Trombley

When I was 13-years-old I had a glimpse of my potential as a competitive runner. Amazing, right? Well, not entirely. From that moment into adulthood, I pretty much “ran” from that opportunity—straight toward self-sabotage and fear. That is, until last year when I decided to look fear and subsequent self-limitation square in the face and overcome it. And I did! It wasn’t easy but I did it and so can you. My story of breakthroughs can benefit anyone who wants to make improvements, regardless of doubt and insecurity. Here’s how I gained awareness, outran my fear and reached my full potential—and how you can too!

During my indoor track season when I was in the seventh grade, I found myself in the stud heat of the 400m, I had no idea what I was doing. It wasn’t my event and I certainly wasn’t prepared for this race. Well, I ended up placing second amongst the best runners in my district. My coach and I had uncovered my talent; my place in the running world. It was magic. But instead of realizing this magic and capitalizing on this newfound potential, this accidental discovery reverberated throughout my running career in a number of self-limiting ways.

Now I could really write a novel on the mental and emotional impact of all of this, but I’ll keep it short. From that moment on I recoiled in fear—fear the magic was a fluke, an accident, fear that it wouldn’t last, fear of success, fear of failure, fear of the hard work that would be required of me if I were to realize my full potential. From that moment on, I never gave 100 percent, at any practice, workout or competition. Sure I did great things during my track career. We went to states in high school and I went on to run track at a Division I school. But I never finished a workout and was never prepared for training or competition. Because of this I had so many injuries throughout college that I have nothing to show for my collegiate track career, other than I made the team, which I suppose counts for something. I believed that I had some ability and never understood the value of hard work and how much I could improve if I just committed, did the work, and got outside of my comfort zone. This self-sabotage has shown up in many places in my life.

Over the years, I ran consistently and sure, I was an above average runner. But despite my competitive spirit, I shrank during competition. And I certainly never trained outside of my comfort zone.

Fast forward to 2015: because of the cancellation of the NYC marathon in 2012, due to Hurricane Sandy, I was required to commit to running in 2013, ‘14 or ‘15, with no option to defer later. I chose 2015 and as it would turn out, this race was only one year after my daughter Elsie was born. I had a horrible experience during my last marathon (Harrisburg in 2012, a week after the cancelled NYC race), which included dehydration, the medical tent, a lot of crying and a serious promise to myself to never repeat that experience. Again, this performance was due to lack of planning.

So as I entered 2015, I was determined (for the first time) to fully commit to training for that race. I was finally ready to address the fear that had been in the driver’s seat for far too long. And during my journey to my 2015 marathon, I had numerous breakthroughs, physically, mentally and just about every other way possible. Here’s what I did and what I’m going to apply to all areas of my life in 2016.

What to do: Have a goal, dream big, tell everyone.
What not to do: Set a goal that feels safe, keep it to yourself.

Most of my life I set goals but never shared them with anyone. This way, if I fell short I didn’t have to suffer the ego crush of embarrassment. So silly. For way too long, I equated my performance with my self-esteem. What did it mean about me if I couldn’t reach a goal? Clearly, I wasn’t good enough, or I was inadequate in some way. So silly. I’ve spent a lot of time, energy and honesty working on this. If you have little or no self-esteem start there and leave no corner unturned.

So my “big goal” for 2015 was to PR and qualify for Boston. And I told everybody. When I showed up on the starting line of the Erie marathon in September of 2015, I can honestly say I was detached from the outcome because I knew I had put the work in. Regardless of what happened that day, I had achieved so much already. I was in the best shape of my life, running and other, and I finally knew what people meant when they said it’s all about the journey and not the destination.

My other “big goal” for the year was to finally get outside of my comfort zone.

So, set a goal, write it down, make it specific and tell as many people as possible. Make it incredible and envision what it looks like to achieve it. Start there.

What to do: Just get started.
What not to do: Think more than act.

A friend of my mine recently described a decision that he made like switching lanes on the highway. How true. We get comfortable in our lanes and the thought of switching can cause so much apprehension. We aren’t always responsible for others in that lane, the point is that we switch.

After I had my daughter and I was cleared to run, it was in the dead of winter; a very cold, snowy winter. I would bundle up and go run for 30 minutes. I was never a fan of running in the cold but I was just so grateful for the time, I went no matter what. My body literally wouldn’t move faster than a ten-minute mile but I found so much gratitude and joy in what I was doing it didn’t matter. I didn’t worry about the new lane, I just got in it.

What to do: Ask for help or support.
What not to do: Go it alone.

I am an only child of a single-parent mother. I was raised on the fierce concept of self-independence. Asking for help was out of the question. I also spent many years of my youth thinking that I knew best. I learned the hard way that my belief was not only wrong, but dangerous. We humans are pack animals and we need each other. We thrive in environments where support is readily available. This is why running groups are so effective.

Knowing my busy year ahead with a new baby and returning to work and my big goal, I hired a running coach. I had to let go of the belief that, “I know best.” I don’t. But my running coach does! And it helped immensely to hand something important over to someone else and let them worry about it. I don’t spend hours putting together my training program. She sends me my workouts each work and I do them. It’s also a whole new level of accountability for me. If she writes it down, I do it. Period.

Not everyone needs a running coach but a support group, a workout buddy, a mentor, or someone similar are invaluable.

What to do: Commit to NO EXCUSES
What not to do: Follow your excuses out the back door.

Excuses are literally the back door when we decide our goal or vision requires too much work. We all have them. And often we use them so subconsciously. What are the top five excuses that you use in your life?   What reasons and justifications do you tell yourself? Not enough time? Not enough money? It’s someone else’s fault?

We make time for what’s important. And a genuine commitment to something is greater than any excuse. Running was truly the only no-excuse zone I had in 2015. I didn’t want to have another painful marathon experience and I reminded myself of that every time I didn’t want to run or do the workout.

Who would you be if you stopped using these excuses? Allow yourself to see this inspired, empowered version of you. And then commit to make your life an excuse-free zone.

What to do: Get comfortable with discomfort.
What not to do: Fear vulnerability.

Growth and progress in any area are hard. And in running, it can hurt. I never pushed myself in all the years of running. And why? Because I was afraid to feel what I felt in that first 400m race in seventh grade. Crazy.

Progress requires that we get outside of our comfort zones, that we push our limits. It can suck, but it’s so worth it. This truly separates the mediocre from the great. I don’t want to be mediocre. Asking yourself what’s the worst case scenario is very helpful. If X really happened, would is be so bad? What do we gain from pushing our limits? Our gain is greater than the fear. Always.

What to do: Detach from the result.
What not to do: Obsess over the outcome.

This is much easier said than done. It’s true in life, if we fixate too much on outcome or the future, rather than the task at hand in the present moment, that creates a lot of anxiety. The reality is we have no control over the future or end result. We don’t. But we can control the moment, the workout, the mile we are currently in and that’s how we arrive where we want. If we commit to each moment and maximize our time and energy there, the results are amazing.

As I already mentioned,when I arrived at the starting line of the Erie marathon, I had already gained so much. The work was done. I could enjoy the race with the satisfaction that I was really prepared.

Many things happened during the race that were outside of my control. For one, I lost my satellite around mile 9. If you’re a runner, you can imagine the horror. What happened was I really tuned in to my body and my surroundings and I had the best race of my life.

So I invite you to think of the one area of your life where you’re not experiencing success or ease. If you commit to applying these breakthrough habits to that area, you will be amazed. Set a goal, just get started, ask for help and find support, no excuses, get comfortable with discomfort and detach from the result. I’m sure in a year from now you’ll be saying I did it too!

Sign up for my newsletter for my free Ebook, Five Signs Your Soul is Sleeping and What You Can Do About It.